Tron is our daily digital asset buy of the day. The coin is relatively inexpensive compared to some of the higher-priced coins on the market. Don’t let the inexpensive coin price dissuade you from purchasing this crypto asset.  We believe that it has the potential to appreciate in value over the next three years as platform capacity and need for blockchain technology increases. Please note, the market price of this coin is subject to change before and after we make your purchase due to the daily volatility of the coin market.  The actual amount of the coin that we purchase for your account, may be slightly less or more than the quoted coin price on this page at the time of your purchase. All broker fees and charges are included in the price of the coin.

TRON (TRX) was founded in 2017 by Justin Sun through a Singapore-based non-profit called the Tron Foundation. The Tron Foundation’s 2017 initial coin offering (ICO) created 100 billion TRX and raised a total of $70 million.

The TRON Protocol represents the architecture of an operating system based on blockchain technology which could enable developers to create smart contracts and decentralized applications (DApps), freely publish, own and store data and other content. According to the TRON Foundation, the ecosystem surrounding this network specializes in offering massive scalability and consistent reliability capable of processing transactions at a high rate via high-throughput computing. TRON was initially created as a token based on Ethereum, but migrated to its own network in 2018. Holders of ERC20 TRX tokens traded them for the TRX digital currency on the TRON network, and the Ethereum-based tokens were then destroyed.

TRON founder Justin Sun is known for being active on social media. He is also the CEO of BitTorrent, and acquired Steem in 2020. 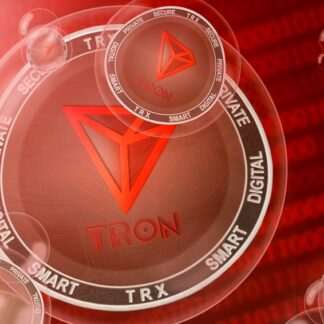