Tezos- XTZ is our daily digital asset buy of the day. It’s ranked #13 in our digital asset coin set. This coin is very stable, but we believe that it has the potential to appreciate in value over the next three years because of its versatility and a platform that combines a self-correcting protocol. The Tezos platform also  supports Turing complete smart contracts. You can’t mine the coin. You have to stake or put up coins to earn a reward for this coin. The interest rate  on this coin is a whopping 4.85%.

What Is Tezos?
Tezos (XTZ) is a multi-purpose platform that supports decentralized applications (DApps) and smart contracts. It was developed by Arthur Breitman, with support from his wife Kathleen Breitman, and launched an initial coin offering (ICO) in 2017 that raised $232 million US dollars. A year after the ICO, Tezos launched its beta network in July 2018.

Tezos is also supported by the Tezos Foundation, which is a Swiss-based entity that promotes the Tezos protocol through grants and other capital vehicles.

How Does Tezos Work?
Tezos works by creating incentives for users to want to participate in the core development of the Tezos protocol. However, the blockchain also uses formal mathematical proofs to ensure that certain critical properties of the Tezos protocol are maintained, thus keeping the network decentralized.

Can You Mine Tezos?
You can’t mine on the Tezos blockchain as you would a proof-of-work cryptocurrency like Bitcoin, as it is based instead on a proof-of-stake consensus (DPoS) mechanism rather than on a proof-of-work protocol. The Tezos protocol is powered by XTZ tokens, which are created through “baking.”

What Is Tezos Baking?
Instead of mining, Tezos bakers (also known as delegates) earn rewards of Tezos tokens by staking, i.e. they put up deposits and are rewarded for signing and publishing blocks, and witnesses then validate the blocks. Dishonest bakers lose their XTZ deposits, which is an incentive to stay honest in the Tezos ecosystem. Tezos is implemented in the OCaml programming language, which is said to
offer “functional, imperative, and object-oriented styles.” 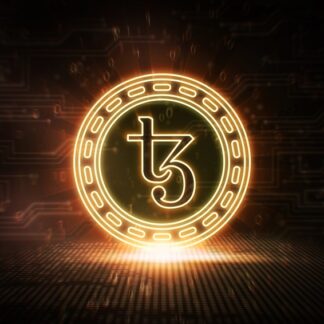