Litecoin is our daily digital asset buy of the day. Its ranked #7 in the Digital asset coin set. The coin has been trending downwards over the last few days, but we believe that it has the potential to appreciate in value over the next three years and see the downturn as an opportunity to buy.  The market price is subject to change before and after we make your purchase due to the daily volatility of the industry.  The actual amount of the coin that we purchase for your account may be slightly less or more than the quoted coin price at the time of your purchase.

Litecoin is a peer-to-peer cryptocurrency created by Charlie Lee, a former Google employee, in 2011. The cryptocurrency was created based on the Bitcoin protocol, but it differs in terms of the hashing algorithm used, hard cap, block transaction times and a few other factors. Litecoin was released via an open-source client on GitHub on Oct. 7, 2011, and the Litecoin Network went live five days later on Oct. 13, 2011.

Lee’s intention behind Litecoin was to create a “lite version of Bitcoin,” and its developers have always stated that Litecoin can be seen as the “silver” to Bitcoin’s “gold.” Litecoin differs from Bitcoin in its prioritization of transaction confirmation speed, which is about 2.5 minutes per block. However, Litecoin users may have to wait up to around 30 minutes for their transaction to be processed due to network congestion.

Litecoin is accepted at a variety of merchants, you can see an updated list on the Litecoin Foundation’s website. 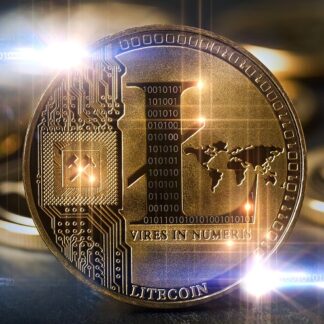